Largest Range, Best Service, Amazing Prices! Since 2006! SmartBuyGlasses offers the world's largest range of designer eyewear products at the best possible prices. For items marked “Best Price Guarantee”, if you find any eyeglasses or sunglasses cheaper* somewhere else, let us know within 14 days of placing your order, and we'll credit the difference back to your account.

How do I take advantage of the Best Price Guarantee?

Simply send an email to our customer service: customerservice@smartbuyglasses.co.nz and provide us the website address of the lower-priced item. We'll verify it according to our guidelines and if it's the exact same model number and color, we'll match the price!

We gladly match the price with the following guidelines:

*The Best Price Guarantee is valid on:

The Best Price Guarantee applies to eyeglasses frames and sunglasses only and does not apply to prescription or contact lenses. Any exact, identical brand name glasses model sold online by an Authorized New Zealand dealer as designated by the official distributor/manufacturer. Colors and sizes must be identical. Any item currently in stock and available for purchase on another website that is also available in the same size, style, and color on www.smartbuyglasses.co.nz The item is available on other websites for shipping to your address. Selected eyeglass frames or sunglasses. Prescription lenses and contact lenses are excluded. We include all applicable shipping and other costs of the other website to make a proper cost comparison The Best Price Guarantee is limited to 14 days after you placed your order on www.smartbuyglasses.co.nz.

When does the Best Price Guarantee not apply?

We are unable to offer the Best Price Guarantee under the following circumstances (including, but not limited to):

The offer cannot be combined with a promotion code. Special promotions such as coupon codes, rebates, gift certificates and "buy one, get one free" are not eligible for the Best Price Guarantee. The difference amount is minimum 1 NZD We do not honor other retailers' misprinted or falsely advertised prices for the Best Price Guarantee. Purchases for resale or commercial purposes are not eligible for the Best Price Guarantee. This offer does not apply to items advertised below our cost. We will not price match prescription lenses or contact lenses. The price match guarantee applies to eyeglass frames and sunglasses only. Items on websites that are auction sites, unauthorized dealer sites and/or discount sites. Items that are out of stock, open-box, clearance, outlet center products and/or refurbished items. Items that are not in stock, ready for shipping on other websites

What happens after I submit my request?

Within 14 days of your purchase date, SmartBuyGlasses will verify and match the lower price and credit your credit card for the price difference assuming the above requirements apply and are met. The item must be currently available on www.smartbuyglasses.co.nz in the same size, style, and color.

If you have not made your purchase at the time of applying for the Best Price Guarantee, we can place the order for you at the matched price upon approval.

Price difference applies to the full cost of the item including tax and shipping (subtracting any promotions). There's a limit of one guarantee claim per item, per order. The difference amount is minimum 1 NZD.

We reserve the right to verify another online company's product availability, authorized dealer status, and price before issuing a price match credit.

How You Get Your Eye Colour 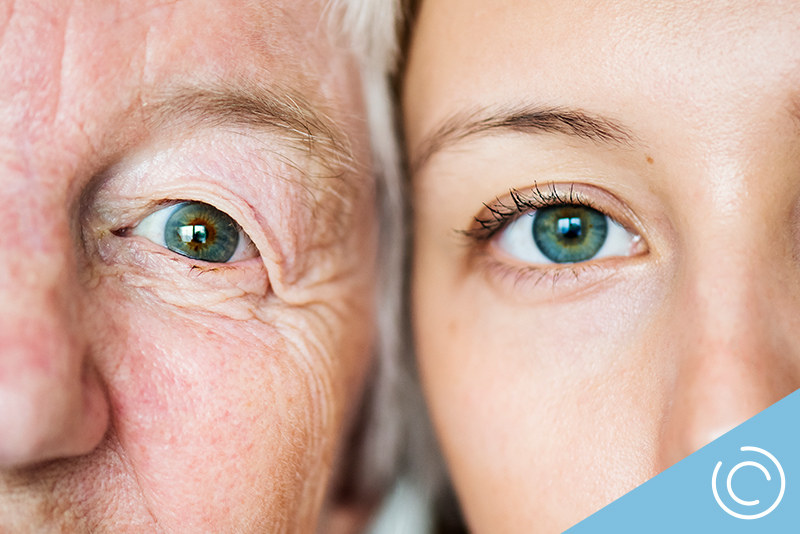 What determines eye color? It’s a genetic trait, of course, just like our hair and skin. In fact, it’s the same chemical which affects the color of all three: melanin. The more melanin-producing cells (or melanocytes) you have, the darker your hair, skin and eyes are likely to be. But beyond that, the science of eye colour is rather complicated. Even now, we don’t know exactly how many genes affect the color of our eyes.

Brown eyes are by far the most common worldwide, and in many areas of the world, such as East Asia and Sub-Saharan Africa, it’s rare to find any other color. That’s because brown is a “dominant” gene, and so any child of both brown and non-brown eyed parents is much more likely (though not certain!) to have brown eyes too.There is no confirmed advantage of having brown eyes but research has indicated that they may be slightly better at absorbing bright light and blocking UV rays.

Blue eyes do not actually contain any blue pigment, rather, they appear blue for the same reason as the sky: light entering the eye is scattered through the iris, and perceived as blue because blue is the shortest wavelength of visible light, and therefore, more of it is reflected back out. So technically, the eyes themselves are not blue at all! The same applies for green eyes, amber eyes, hazel eyes, and every shade in between – these are all caused by varying degrees of melanin, both in the back of the eye of the iris and the front of it, as well as the structure of the collagen: finer collagen reflects more light, causing the eyes to appear bluer, while coarser collagen reflects less, giving us green eyes. In people with albinism, there is no melanin whatsoever in the eye, and as such they appear to have red color eyes: not because they’re reflecting red light, but because we can see the blood in the eyes! This total lack of melanin also makes albino eyes highly susceptible to UV, making sunglasses a necessity outdoors.

Even if you’re born with blue, gray or green eyes, there’s no guarantee you’ll keep them throughout your life. The melanin-producing cells in your eyes may only start to become active after a few months or years, and in rare cases, even longer. When this happens, brown pigment will start to be created, leading to darker eyes.

Heterochromia is a rare medical condition in which the two eyes are different colors. This condition is more prevalent among cats than humans, and usually consists of one blue eye and one of a darker color. Although it’s normally hereditary, it can also be induced by a severe injury, such as happened to David Bowie, who was nearly blinded in one eye during a fight at school. The condition doesn’t always mean having two different colored eyes, either: so-called sectoral heterochromia can result in having an eye which is multi-colored, with one dominant color and a “patch” of another. Like everything relating to eye color, it has been shown in scientific studies to be enormously complex – the old belief that blue eyes were simply a recessive trait has been disproved. Although for most of the world, brown-eyed parents having brown-eyed children is the norm, in theory your children could have eyes of any color, whether by genetics or mutation.

Was this article helpful? Thanks for your feedback!
Yes No
Share
Discover articles about: You are all set!
Visit Membership

Use another E-Mail? Register
Not a member? Register

Get personalized eyewear recommendations with our style finder and find the perfect pair for you.

What are you looking for?

What type of sunglasses do you want?

Show me my style recommendations
Next » « Previous